The Church in Alkmaar

The service was in Dutch, but we had these pretty nifty wireless headphones that we wore. In the back of the room was Terri, who translated the service into English, and it was piped right into our heads! We were in Alkmaar, a city about the size of Simi Valley 40 minutes north of Amsterdam by train. Chris & Terri are missionaries with Greater Europe Mission and have been assisting this Dutch church for nine years. The church itself was some 20 years old, and was currently meeting in a large room at a community center. 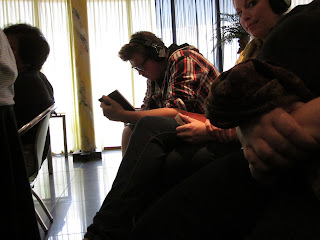 The group was young—lots of kids. They sang a kids’ song or two, then dismissed them to the children’s program. The room, which had been pretty full, suddenly seemed sparsely populated. Lots of empty chairs. I guess there were more kids than I realized! The worship songs were mostly familiar, even though they were in Dutch. I tried to sing in English, but found myself forgetting the words as I studied the Dutch on the PowerPoint slide! Weird, but pretty cool.

This was indeed the Body of Christ, another expression, a different group, but the same Lord and God. Many of the elements of the church in America were here: worship team with its full complement of drums, keyboards, and guitars; PowerPoint slides; a video showing kids in a third world country getting shoe boxes from Samaritan’s Purse—I noticed several shoe boxes under the chairs of kids—and of course the sniffling and tissues followed; coffee, tea, and snacks; a baby dedication was uncannily similar to many that I have done myself.

But those are just the pieces of the frame that surrounded the reality of a group of people that had gathered because of their common love of their Savior and their God. That was the true portrait here. The newly installed, youngish pastor shared how without God we can do nothing; that our activities are worthless without His power. He prayed and asked God to be present in the service that day; He was.
Posted by Chris at 2:27 PM

Chris
I am the Director of Church Relations at Eternity Bible College in Simi Valley, CA. I am married to my amazing wife Dawn and have two awesome adult children. I am passionate about seeing followers of Christ become even more passionate about following Him! I believe in the glory of the church, the Bride of Christ, even though she is pretty ugly sometimes.